DHS Official: I Was Ordered to Purge Records of Islamic Terror Ties

THE VOICE OF THE MARTYRS

Muslim Student Challenges Jewish Professor, He Shuts Her Up On The Spot 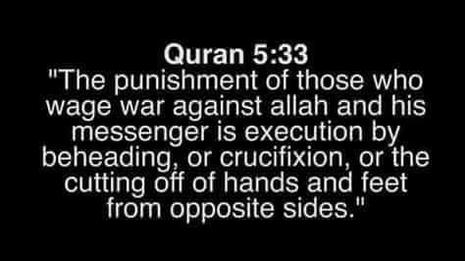 OUR FOUNDING FATHERS THOUGHTS ON ISLAM

HALAL (What is Halal Meat?)

THE TRUTH ABOUT ORLANDO SHOOTING AND OBAMA'S CIVILIAN ARMY 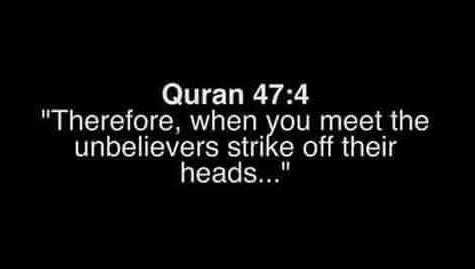 ISLAMAZATION BEGINS: WHEN THERE ARE SUFFICIENT

Muslimsin a country to agitate for their religious privileges.
When politically correct, tolerant, and culturally diverse societies agree to Muslim demands for their religious privileges, some of the other components tend to creep in as well.
Here’s how it works.
As long as the Muslim population remains around or under 2% in any given country, they will be for the most part be regarded as a peace-loving minority, and not as a threat to other citizens. This is the case in:

At 2% to 5%, they begin to proselytize from other ethnic minorities and disaffected groups, often with major recruiting from the jails and among street gangs. This is happening in:

From 5% on, they exercise an inordinate influence in proportion to their percentage of the population. For example, they will push for the introduction of halal (clean by Islamic standards) food, thereby securing food preparation jobs for Muslims. They will increase pressure on supermarket chains to feature halal on their shelves — along with threats for failure to comply. This is occurring in:

At this point, they will work to get the ruling government to allow them to rule themselves (within their ghettos) under Sharia, the Islamic Law. The ultimate goal of Islamists is to establish Sharia law over the entire world.

When Muslims approach 10% of the population, they tend to increase lawlessness as a means of complaint about their conditions. In Paris , we are already seeing car-burnings. Any non-Muslim action offends Islam, and results in uprisings and threats, such as in Amsterdam , with opposition to Mohammed cartoons and films about Islam. Such tensions are seen daily, particularly in Muslim sections, in:

After reaching 20%, nations can expect hair-trigger rioting, jihad militia formations, sporadic killings, and the burnings of Christian churches and Jewish synagogues, such as in:

At 40%, nations experience widespread massacres, chronic terror attacks, and ongoing militia warfare, such as in:

From 60%, nations experience unfettered persecution of non-believers of all other religions (including non-conforming Muslims), sporadic ethnic cleansing (genocide), use of Sharia Law as a weapon, and Jizya, the tax placed on infidels, such as in:

After 80%, expect daily intimidation and violent jihad, some State-run ethnic cleansing, and even some genocide, as these nations drive out the infidels, and move toward 100% Muslim, such as has been experienced and in some ways is on-going in:

100% will usher in the peace of ‘Dar-es-Salaam’ — the Islamic House of Peace. Here there’s supposed to be peace, because everybody is a Muslim, the Madrases are the only schools, and the Koran is the only word, such as in:

Unfortunately, peace is never achieved, as in these 100% states the most radical Muslims intimidate and spew hatred, and satisfy their blood lust by killing less radical Muslims, for a variety of reasons.

Somali Refugees Living in Tucson Started Hitting the Gym to Get Stronger...for Beheadings

FORMER MUSLIM TELLS ALL ABOUT ISLAM

FORMER MUSLIM TELLS ALL ABOUT ISLAM

Chilling New Map Reveals US States With The Most ISIS Supporters, One Of Them Could Be Yours..

Watch: Muslims in Nigeria use their girls as suicide bombers to target Christians 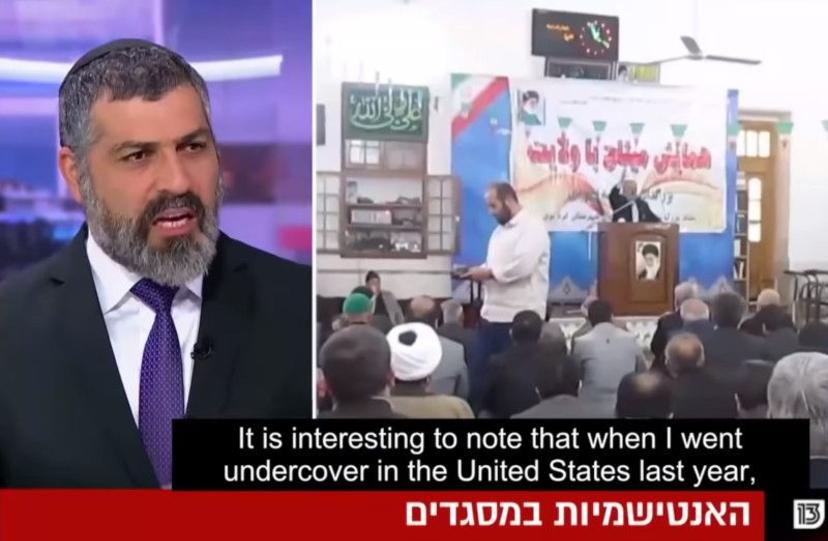 Former Muslim Says We Need To STOP DENYING THIS About ISLAM!!

UNDER COVER VIDEO OF MUSLEM TERRORIST ACTIVITIES AGAINST JEWS AND ISRAEL 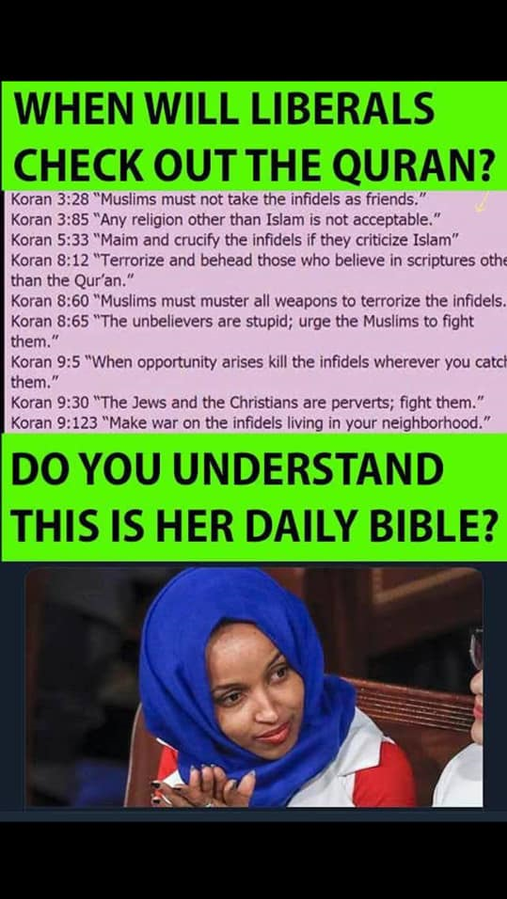 EVILS of ISLAM and SHARIAH

but Obama & the media don't want you to know that. The Immigration and Nationality Act that passed June 27, 1952 revised the laws relating to immigration, naturalization, and nationality for the United States. That act, which became Public Law 414, established both the law and the intent of Congress regarding the immigration of Aliens to the US and remains in effect today.

Among the many issues it covers, one in particular, found in Chapter 2 Section 212, is the prohibition of entry to the US if the Alien belongs to an organization seeking to overthrow the government of the United States by "force, violence, or other unconstitutional means." This, by its very definition, rules out Islamic immigration to the United States.

This law is being ignored by the White House. Islamic immigration to the U.S. is prohibited under this law because the Koran, Sharia Law and the Hadith all require complete submission to Islam, which is antithetical to the US government, the Constitution, and to the Republic. All Muslims who believe that the Koran is life's guiding principal also believe in total submission to islam & sharia law.

To all who claim that Islam is a religion, read the law again ... the law states that Aliens who are affiliated with ANY "organization" that advocates the overthrow of the U.S. government are prohibited. 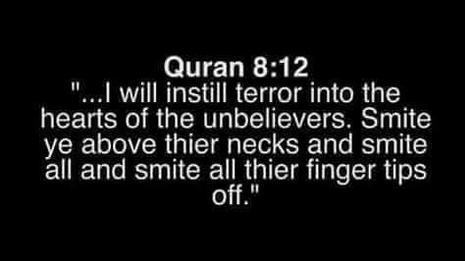 Jesus Cast Out Satan from Muslim Girl, She was Healed and Her Family Believed

PragerU: The Muslim Brotherhood seeks to destroy Western civilization from within and establish a global Islamic state. Ami Horowitz exposes its plans within America.  VIDEO

DANGER OF MOSQUES IN AMERICA

SHARIA LAW VS CHRISTIANITY & THE US CONSTITUTION

Sharia Law will never be compatible with Christianity or the US Constitution; like the East and West will never meet! If a Christian or even a atheist, Buddhist or Hindu, cuts off his wife's head for being naughty it is murder. When a Muslim cuts off his wife's head for the same thing it is accepted. This very fact confirms that Islam is governed by an evil spirit (Satan) and is supernatural! No living being in its right mind could condone the Sharia thinking, unless they were possessed by an evil spirit. Michigan's Governor definitely has this spirit as well as Obama! Remember our US Constitution says that all men are created equal; there is no equality in Sharia! Trying to embrace both Sharia and the Constitution is like Jeremiah told us burning incense to Baal and Molech in Gods Temple: and Jesus said about being unequally yoked! 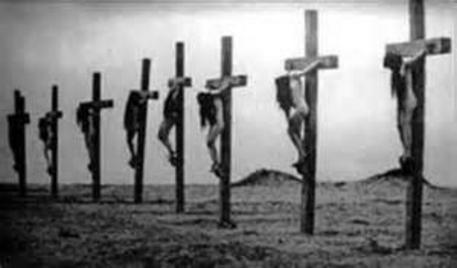 YOU DON'T KNOW WHAT OBAMA SAID AT THE MOSQUE

MUSLIM OF THE YEAR ... THE ENVELOPE, PLEASE