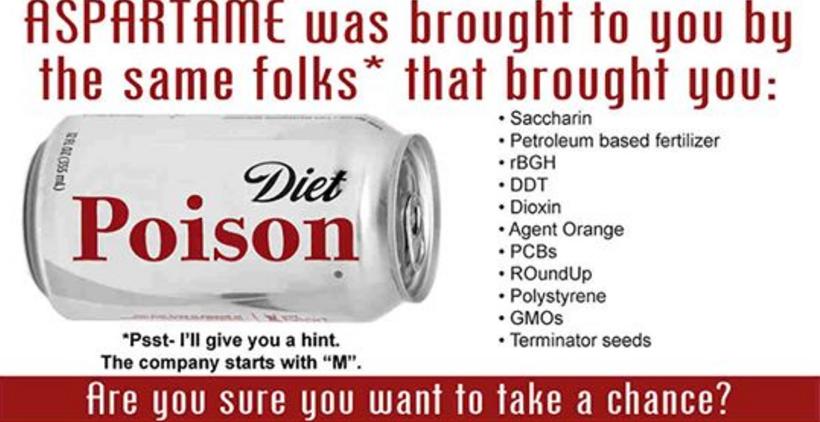 It’s time to play Kick the Can—of soda, that is.

In a 22-year landmark study published in The American Journal of Clinical Nutrition involving over 125,000 people, significant links were found between daily intake of aspartame and the development of leukemia and lymphoma. (1) These findings are consistent with previous studies in animal models:

“A recent megaexperiment in 1800 rats tested at aspartame doses much lower than the currently acceptable daily intake (ADI) for humans reported a dose-dependent increase in lymphomas, leukemias, and transitional renal cell tumors.” (2, 3)

Broken down, here are the primary results of this mega-study.

Consuming only one 12-ounce can of diet soda per day increased risk of lymphoma and myeloma (cancer of blood plasma), the incidence increasing in correlation with aspartame intake. The risk was much higher in men (it hasn’t been identified why that is the case).
There is an elevated risk of lymphoma with higher consumption of non-diet soda in men than women.
Annual consumption of aspartame in the United States is estimated at 5000-5500 tons and the most common product in which it is used is diet soda.
Aspartame (especially in liquids) breaks down into asparitic acid, methanol, and phenylalanine; when ingested, methanol turns into formaldehyde—a known carcinogen.
Previous studies that didn’t support a link between aspartame and cancer were limited in time and scope. This study included a large sample size and scientifically-viable time period and tested subjects at intervals throughout the study.
Subjects’ measured aspartame intake included that added from packets (e.g., NutraSweet and Equal) and contributed to the weighting of the results.
Subjects with a higher intake of diet soda had a higher body mass index and animal protein intake and were less likely to smoke. (This is highly significant: it is known that aspartame contributes to obesity and metabolic syndrome; the result noted here corroborates that finding. Additionally, this group of diet soda drinkers didn’t smoke cigarettes, discounting smoking as a contributing factor to the development of cancer in the study.)

This research begs the question: what will we find about the effects of aspartame on human health twenty years from now, when the generation that grew up with it is at middle age?

If this isn’t enough to get you to kick the can to the curb for good (and then recycle it!), other studies show a direct connection between the methanol in aspartame and neurological disease.

Thirty years ago, a toxicologist from the Food and Drug Administration (FDA) testified before the U.S. Congress on the subject of the safety of aspartame in the food supply:

“…the cancer-causing potential of aspartame is a matter that had been established way beyond any reasonable doubt… Given the cancer-causing potential of aspartame, how would the FDA justify its position that it views a certain amount of aspartame as constituting an allowable daily intake or safe level of it? Is that position in effect not equivalent to setting a tolerance for this food additive and thus a violation of that law? And if the FDA itself elects to violate the law, who is left to protect the health of the public?” Congressional Record SID835:131 (8/1/85)

Yet aspartame is not only legal, it’s consumed at thousands of tons per year.

Aspartame poisoning, while not on most doctors’ diagnosis chart, is disturbingly real. It can manifest in symptoms similar to multiple sclerosis, digestive problems, severe muscle pain, headaches, dizziness, and blurred vision. These symptoms will subside if the artificial sweetener is discontinued. The research here discussed shows that sustained exposure has a cumulative effect and there is a point at which it becomes life-threatening.

Oh, and by the way: regular soda is just as bad as diet.

If you need a sweet drink, try fruit-infused water and mixing honey or maple syrup with water or club soda (real club soda that contains only water and bicarbonate of soda). If it’s the push of caffeine you want, drink coffee, black tea, matcha, or yerba maté. But by all means, kick the killer soda habit.